GOLD COAST EVENTS #1 AND #2 AT MANDALAY BEACH IN OXNARD! 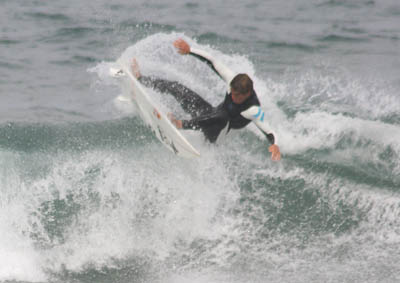 CONNER COFFIN BLOWING UP THE TAIL AND THE SCOREBOARD.

Schoolâs back in session and so is the NSSA!  Sticking with tradition, NSSA opening weekend on the west coast kicked off with the Gold Coast Conference events #1 and #2 at Oxnardâs Mandalay Beach.  In some of the best contest conditions witnessed at the Mandalay beachbreak, the waves and weather were in fantastic form with a building southwest swell producing waves in the shoulder to overhead good running lefts and wedgy rights with gorgeous summer 80 degree temperatures.  The winds stayed calm throughout the two day doubleheader providing killer surf conditions for the competitors and they came fired up and ready to make an early jump to the top of the rankings of the 6-star rated event for Saturdayâs opener and 4-star rated event #2 on Sunday. 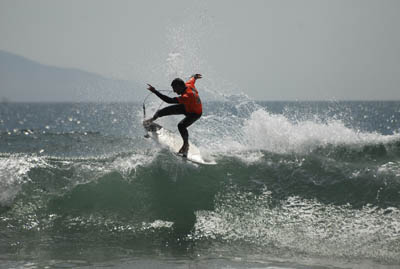 Santa Barbaraâs Antoine Alllain brought the biggest game of his five-year NSSA career to the season opener posting back-to-back double victories in the Menâs division.  Saturdayâs victory was Allainâs first ever victory with a clear victory over runner-up Chris Keet.  On Sunday, Allain had a slight pressure melt-down in the Menâs semis squeezing out an advancing third place but then in the final took command locking in two high scoring rides of 8.0 and 7.5. âThis was a nice way to open up the season,â said native Frenchman Allain who was brought up in the Hossegor beach breaks.  âI grew up surfing Hossegor and the waves here at Mandalay are similar to it.â  Allainâs impressive double victory will vault him to a big lead in the Menâs ratings.  âIâve been surfing NSSA so many years and have struggled to get past round one.  Iâve been training all summer, going to the gym, training in beachbreaks and really staying focused on surfing.  My goal is to do well in contests this year and to get back-to-back wins in great waves, it doesnât get much better than that.â In the Juniors division, Conner Coffin brought his big-league power moves to wedgy high performance peaks.  With a dominant performance from heat one through the final, the 2009 National Open Menâs and Open Juniors finalist showed the crowd he is in top-of-the-world form.  Conner was fired up on the wave conditions and was putting on a show on the side of the contest area!  He nailed a perfect 10 in his Juniors round 2 heat and then posted excellent scores of 9.5 and 8.0 to secure the first place finals decision. âThis contest is so much fun and the waves are ridiculously good,â Coffin said. âItâs the best waves Iâve seen here for so long.  The good sets are head high plus and the lefts are roping!â 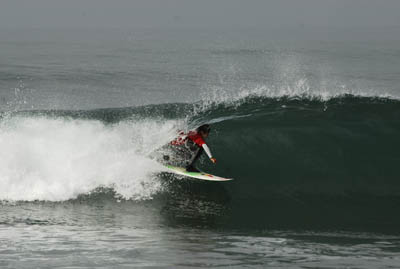 Without a doubt, the show-stealer of the weekend was Patrick Curren.  The 12-year-old returned from the 2-month summer hiatus with technical skills that were going through the roof which was the hot topic on the beach.  The youngest son of 3-time World Champion Tom Curren, Patrick took control of the Boys division winning 9 consecutive heats en route to double triumphs in the Boys category and then stepping up big-time in the event #2 Juniors final sealing that one.  From the get-go, Curren sat on a good left bowl on the north end of the contest area that was aptly named âPatâs Peak.â Although Curren resides in Santa Barbara approximately 30 miles north of the Mandalay contest venue, he ripped the spot as if it was his own backyard consistently posting 8âs, 9âs and even putting a flawless 10-point ride on the scoreboard.  âLast time I surfed here was at last yearâs Gold Coast but we scored this weekend.  I saw this really good left so I sat on that wave for most of the contest,â Curren said after taking his third win of the weekend in the Juniors.  âI was super stoked because yesterday was my first win in the NSSA.  âI admit I was kind of intimidated in the Juniors final.  Those guys are all bigger than me but I got that really good left which scored an 8.5.â  When asked if his legendary dad gives him any tips, Pat said, âMy dad helps me a little bit.  He usually gives me a strategy and he tells me to have better wave selection.  These wins were great for my confidence because Iâm going to do the Southwest Open Juniors this year so that is going to be very competitive for me.â 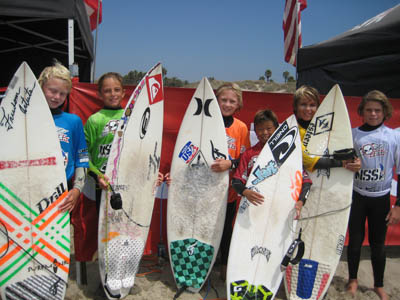 In the Menehuene division, Malibu up-and-comer Thelen McKinna-Worrell scored his first NSSA win in event #1.  Working with coach Toma Tomatsuri over the summer break, McKinna-Worrellâs improved surfing ability was clearly evident as he also took third in the Menehuenes and fourth in the Boys final in event #2.  National Mini Grom Champion Kei Kobayashi turned up for Sundayâs comp and went right to work posting his first win of the season.  Kobayashi took command of the final on his first wave posting an excellent 8.0 score on a set left where he comboed together three solid top-to-bottom backside hacks.

In the Womenâs division, Catherine Clark took the win in event #1 while Frankie Harrer ruled day two and took out both the Womenâs and Girls divisions.  Lauren Heinemeyer claimed her first career victory in the Girls final on Saturday.  Ventura local John Gardner dominated the Seniors with double wins as well as Chris Keet in the Masters.  JP Garcia was back in action in the Longboard clinching the victory in event #1 and Thomas Kunz wrapped up first place in event #2.